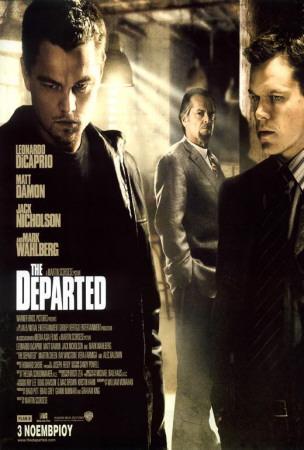 The Departed is a 2006 film directed and Written by Martin Scorsese. It stars an A-list cast with the likes of Matt Damon, Leonardo Dicaprio, Mark Wahlberg, Martin Sheen, Alec Baldwin, and Jack Nicholson as the main cast of characters. It won the Academy award for best picture, best director, best writing adapted screenplay, and best film editing among many other awards later on.
The film is about two opposing sides playing a very dangerous game of cat and mouse. On one side you have the Boston State Police who enlist the help of Billy Costigan ( Leonardo Dicaprio) who is a police academy dropout to infiltrate the Irish mafia and act as a mole for the police. The other side is the Irish Mob led by Frank Costello ( Jack Nicholson) who enlists the help of his nephew Colin Sullivan ( Matt Damon) to infiltrate the Boston State Police and act as a rat for the mob.  What ensues is a thrilling battle where both sides are trying to stay one step ahead of each other while trying to figure out who the rat is on either side. Both rats play a very dangerous game of trying to stay as inconspicuous as possible and on the surface, it looks as if Colin has an easier time blending in with the police than Billy has with the mob. A sub plot also develops as Colin begins dating a police shrink. That very same shrink also begins counseling Billy and they begin a relationship together. In my personal opinion, while i like the idea of both the rats dating the same woman and neither of them knowing who the other man is, I do think the film probably would’ve been fine without it.  Towards the end of the film is where things get really interesting when Colin requests constant surveillance on captain Queenan. What comes out of that however is the death of Queenan by the hands of the mafia. Because of Queenan’s death, Billy has no one to contact within the police force. Afterwards, everything begins to crumble as Billy finds out that Colin is the rat for the mob, Colin kills Frank and then Billly, and then Colin gets killed.
Despite what many people say, I strongly believe that this film is not a gangster film but rather a film noir or crime drama. The reason I  say that is because in most gangster flicks, the film centers solely on the gang itself or the inner workings of said gang. The Departed focuses on the mob and the police force trying to stop them. It feels like a gangster film and a detective films fused and created this holy masterpiece of a movie directed by Martin Scorsese. In all seriousness though, this movie does showcase the inner workings of a gang and shows their escapades but they are not front and center. The Irish mob is the enemy with Frank Costello as the main antagonist. Frank is that purp that the detective is trying to catch. He is that one enemy, that one criminal that the detective has dedicated his life to catching. If this was one hundred percent a gangster film then it would be from Frank’s perspective or Colin’s perspective. It would have focused on showing Colin destroy the police from the inside so the gang can keep doing what they’re doing without worrying about a thing. This is not a gangster flick though. This is a film noir and it is amazing.